Painting my Adeptus Mechanicus for Armies on Parade (I will post a write up soon!) has left me a little tired of painting mechanical models with so much red and metal. I have been left wanting to paint something organic and colourful, and this want was answered when I scored a great deal on a second-hand Tyranid lot on eBay. 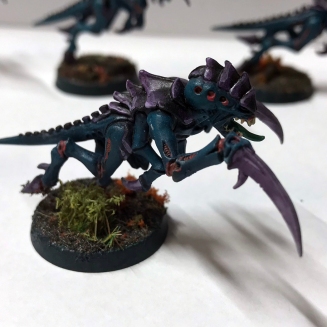 The bundle consisted of a broken thickly painted Carnifex, 3 painted Tyranid warriors, 8 Genestealers, and many Hormagaunts and Termagaunts in varying states of assembly. I suspect that it was made up of the old Tyranid battle force box. Overall, the models were almost all salvageable despite the significant breakage and thick painting on some models.

In lieu of painting test models for my custom hive fleet, which I personally find tedious, I used an outline of a Gaunt from google and digitally coloured over it while using a Citadel paint chart as a reference. The scheme I decided on featured using a Green Stuff World colour shift paint. I haven’t thought of a hive fleet name yet, but I plan to run them with Kraken rules primarily. 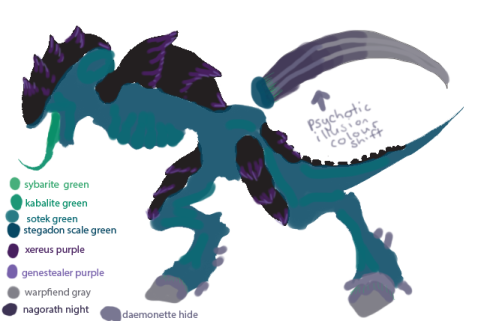